To be honest, I had heard so much about this book for so long before I read it. I wasn’t sure if I’d like the idea of the age gap so I put it off.  Until one day, I read the allowed preview on Amazon and I was hooked. I mean put a fork in me, I was done. I NEEDED to read these books. Then life happened. Seems to happen a lot LOL Knocked off my feet from suffering from a stroke, my husband bought these books for me to read. He had heard me talk about it enough before. These were actually the first books I read after it all and I’m so glad I did.

This author certainly has a way with words and is definitely in the right field. The way she can pull you in so quickly and without effort astonished me. I can’t believe how quickly I fell in love with Sebastian and Caroline.

However, as quickly as I fell in love with each of the characters there was still that little bit of angst that followed the age gap. Sebastian was your ALMOST typical teenager. His home life was less than to be desired. I wanted to throttle his parents a time or two. But then again, I wanted to do the same for Caroline’s husband too.

Sebastian’s life was planned out by his father. A life that Sebastian didn’t want. His only reprieve from the depravity he suffered at home was the time he spent with Caroline. You could call her the lighthouse in his storm. She gave him time to be himself. To dig into who HE was and not what was expected of him.

Surfing was his favorite way to escape. It was not approved by his father, which is probably why he loved to do it even more. But then Caroline returned to the base and his favorite past time changed, though he still surfed, he would much rather just sit and talk with Caroline.

Caroline’s life wasn’t easy either. A husband that had pretty much forgotten she was there other than to host parties, cook and keep up the appearance that he felt a man in his position should have. Slowly, Caroline began to feel lost in her own body. When her husband came home there was no time to talk about her plans of wanting to be a journalist, or the steps she took in that direction. It was him and him alone. She knew that had gotten used to that until she wasn’t anymore.

Becoming complacent and afraid of forgetting her own self, she started stepping further away from what was expected of her and closer to what SHE wanted. She took a job at a small civilian paper. This one moment made her feel like she wasn’t suffocating.

And then there was Sebastian.

He became her best friend. Her confidant. Her happy place.

But he shouldn’t be. She was married and he was so much younger than him. Yet nothing she could tell herself, or Sebastian, dulled the feelings blooming between the two. Sebastian had no problem with where things were heading between them. Of course, he didn’t have as much to lose as Caroline, did he?

The solace the two found between each other was beautiful and not at all awkward as I thought it would be. It was heartbreaking sometimes, but even more it was powerful. But as they say… What goes up, must come down. And boy did it.

Banished from her home. Chained to his. The couple is torn apart by the reality of their situation. What they accepted, the world did not.  Two hearts and lives were torn apart and hearts were shattered. Though their love may have been forbidden, it didn’t make it any less real.

And that folks is ONLY the first book. Get your copy of The Education of Sebastian here.

Ten years later, Caroline is now a successful journalist. Yet, try as she may, she never fully forgot Sebastian. She tried dating after several years, but nothing ever met up to the love she never saw coming.

Love life aside though, Caroline was happy. She had the career she always dreamed of. Sought after and in high demand. However, it was this career that brought her face to face with the broken woman she used to be.

Sebastian was angry, so angry. Caroline was in shock and then angry too. They had plans. She stuck by them as long as she could, but he didn’t ever come. He never found her. They fought. Sebastian drank. They fought some more. Then Sebastian decided he wanted to take her somewhere before they took off to Afghanistan.

Traveling the country side, he took her to Italy…

The turmoil that both are in during this trip, I can’t even begin to describe. Well, I could but it would not do the author justice at all. Each are the love that the other couldn’t forget, couldn’t fully let go of. Yet, they were forced apart. A love that could have soared over the years, crushed before it really had a chance to spread its wings.

But as the trip to Italy, to find the town her father grew up in, continued on their feelings – old and new – began to take flight again. Yet a cloud lingered over their happiness. A cloud that they were about to run straight into.

Sebastian worried about her safety. She worried about his. But they couldn’t once again let their love known. Secret nightly rendezvous in her tent were all they could share. Then before she could fully settle in, she was made to leave.

Leaving him behind was the hardest thing she ever had to do. She wrote him all the time. He wrote her back as often as he could… until they stopped coming all together.

Their worst nightmare, Sebastian was injured. Lost to her for a while. But when he finally came home, he wasn’t the same. The war, his injuries, his discharge, it changed him. Caroline wasn’t giving up on him this time. No matter how much he went back to drinking his problems away. No matter how little he talked to her. No matter how angry he was. She couldn’t give up on them this time.

But then there was the niggling thought in the back of her head that she’d been here before. Not all of it, but the part of no communication part. Would the pair be broken down again before they fully get to latch on to the love they know cannot be match by another single soul out there?

The author knows how to drag a reader around on their hands and knees and pray for this and that to happen so the characters can be happy. Though this is TECHNICALLY the end of their story, it isn’t… (HEA by the way).

This is the second book of the trilogy, The Education of Caroline. Get your copy today here. 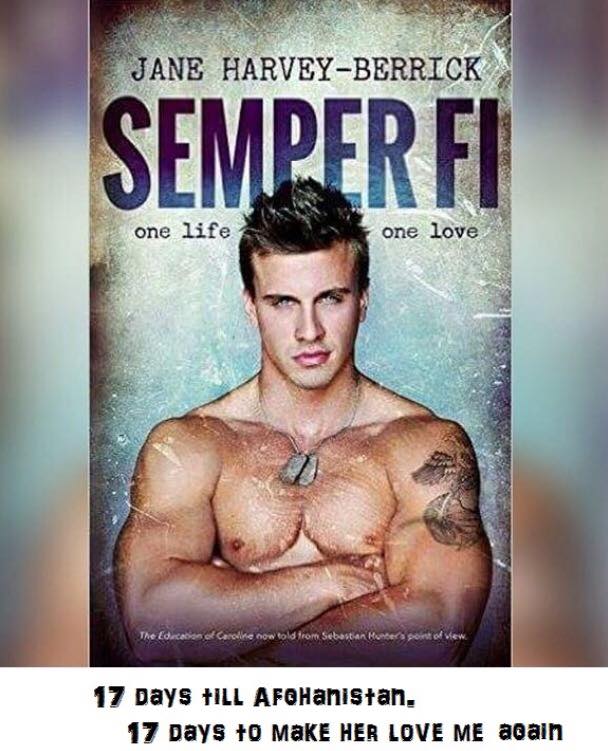 Now as I said above, their story is complete by the end of book 2, but don’t stop there. You need to read the third installment of this INCREDIBLE trilogy.

The third installment is book 2 from Sebastian’s POV. Though the series of events are the same from both books they are so different too. You get to see exactly what he’s gone through over the 10 years that they’ve been separated. It honestly broke my heart more than book 2 did.

Not that I loved Sebastian’s character more, but truly I think he might have suffered so much more than she did. He was young. Everyone viewed him like Caroline pushed herself on some unknowing kid, taking advantage of him.

He had to overcome the fact that the woman he loved more than anything walked away without looking back. At least that’s what it felt like to his broken heart. Life for him at home was intolerable after that.

But he grew up. Decided to make a career out of the military. Pushed through as many girls as he did deployments and alcohol. Then BAM! His past meets his present and he’s knocked off his feet.

Showing up at her door later that night, drunk, probably wasn’t in his best interest, but he was angry so angry and all he wanted was answers. But nothing he was saying or thinking would come out right. He leaves after pissing her off and decides to make her feel as he felt all these years…

Like I said… Though the story follows the same events, it’s completely different. You really need to read it from the view of Sebastian. My heart broke even more and I cried even more tears even as I knew what was going to happen it still broke me just the same if not worse than in the previous book.

Get your copy of Semper Fi: The Education of Caroline today here.

This series will remain close to my heart. Not because it was taboo or because it was the first books I was able to read after my stroke. Not even because of characters. It’ll remain with me because of the emotions that it evoked in me. When I read, I read to escape for a moment. To feel outside of what I am feeling. These books, this author, gave me moments to feel outside of my own bubble. It gave a realistic, emotive, description of what love really is. It’s not something that you can make happen. It just happens. We don’t pick who we love, when we love them, or for how long. It doesn’t matter our ages when we fall in REAL love, it’s there regardless of it all.

The author has come out of no where for me and will remain in my ALL TIME FAVORITE AUTHORS forever. I will pick up more of her books. I will recommend the hell out of her as an author, but even more I wish her nothing but success. She has talent and I hope that she finds her happiness in life, in writing, in love.

I can’t recommend these books enough. Pick them up today. Then let me know what you thought. I could talk about these books all day long. Ha!